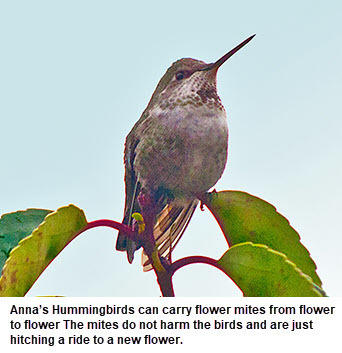 Mites are tiny, wingless arachnids, relatives of spiders. ticks and scorpions. There are over 30,000 species of mites living in a wide variety of habitats. Some are free-living in soil, water, and elsewhere and some are parasitic. Nearly all are very tiny, usually less than 1mm long. There are a group of mites called hummingbird-flower mites. These tiny mites live in flowers that are pollenated by hummingbirds.  Hummingbird-pollinated flowers tend to be long and tubular and the mites spend their entire lives deep within some of these flowers. As a flower begins to age and wither, these mites must seek the protection of a fresher flower if they are to survive. They may be able to walk to an adjacent flower on the same inflorescence, but they are unable to reach another flower on a different plant without some help. Here is where the hummingbird is of assistance.

The mites are very fussy about where they live, choosing to live only in one species of flower. There are many species of hummingbird-flower mites and each species will live only in one species of flower, so there is no competition between mites. Nearly all hummingbird-flower mites are found from Mexico to South America.  At least one species does range as far north as the southern California coast, choosing a species of Indian Paintbrush in which to live. While the mites will each live in only one kind of flower, they are not fussy about what kind of hummingbird they choose as their transportation. Whatever kind of hummingbird probes the flower at the right moment will be selected to provide the necessary ride.

The mites simply want a ride and do not directly harm the birds. However, there is an indirect affect. The mites feed upon the flower nectar and thus provide direct competition with the hummingbirds for food. Flowers with mites have significantly less nectar than the same kind of flowers without mites.