As its common name suggests, Barn Owls may be found in structures in agricultural regions and they are often highly valued by orchardists and farmers around the world. These birds are also sometimes found in open urban expanses, such as large parks.

There are few species of land birds as widely distributed as Barn Owls, which are found on all continents except Antarctica. Over 28 different races are known, and although they are members of the same species, these different races show considerable variation in size and color. Barn Owls in the Galapagos Islands, for example, are only about half the size of our Barn Owls, and our owls tend to be much whiter than those in Europe. 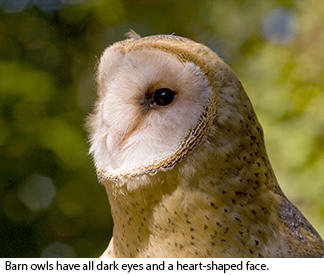 Many readers may never have seen a Barn Owl, however they are relatively common. Very nocturnal, they often do not become active until well after sunset. They often roost and nest in human structures such as barns or silos, hence their common name, but in Europe, some use steeples of old churches and are sometimes referred to as “Church Owls.” Because of their heart-shaped faces, they have sometimes been called “Monkey-faced Owls,” and their white plumage earns them the nickname of “Ghost Owl” or “White Owl.”

Barn Owls are non-migratory, remaining in their territory year-round. They feed mostly on small rodents, primarily voles, which is why they are well-liked by many farmers and orchardists. A large population of voles can devastate a grain crop, so attracting Barn Owls is one of the best ways to control the rodent population. Old wooden barns are generally more conducive to the needs of nesting Barn Owls, as they offer more rafters and lofts which are often lacking in newer, metal constructions. This lack of nesting sites, along with habitat destruction and some agricultural practice changes, have caused a decline in many populations of Barn Owls. To help offset this decline, farmers can build large nest boxes to attract these beneficial owls. Farmers in Oregon and Central California and rice growers in Malaysia have all had success in rodent control by putting up nest boxes for Barn Owls. Wild Birds Unlimited also sells large nest boxes designed to attract Barn Owls. Like other owls, the Barn Owls will simply use the box and put no additional nesting material into the box.

Shrews, bats and some small birds are occasionally eaten by Barn Owls but they rarely eat reptiles or amphibians. Sometimes called “Gopher Owls,” adult gophers are too large for Barn Owls to prey on, but babies might be taken.

Barn Owls are easily recognized by their distinctive, heart-shaped faces, and relatively small, all-dark eyes. Male and female look alike in most owls but male Barn Owls have much whiter bellies and underparts than do females, which are tawny-colored with many small, dark spots. The more spots she has, the more resistant the female seems to be to lice, parasitic flies and feather parasites. Such densely-spotted females are also much more attractive to males as prospective mates. Mated pairs often preen each other (known as allopreening) and the more spots on the underside of the female, the more frequently her mate will preen her, thus paying her more attention and creating a stronger pair-bond. He will also give her young more attention when her eggs hatch.

Characteristic of Barn Owls are long legs, which enable them to more easily capture prey in tall grass or weedy fields. Some people are surprised to learn that it is not necessary for Barn Owls to see their prey for successful capture. Experiments have shown that Barn Owls can accurately locate and capture live prey in total darkness. Their ability to hear is so keen and well-focused that the owl can easily hear the movements of prey in the grass.

Silent flight is a characteristic of most owls, not just the Barn Owl, and extremely soft feathers over the wing help an owl fly silently. It is often assumed that silent flight enables an owl to sneak up on its prey without being heard. However, day-hunting raptors, including day-hunting species of owls, do not fly silently and are quite capable of capturing prey efficiently. Silent flight enables the owl to listen for sounds made by possible prey without the competing sounds of its own wingbeats.

Barn Owls are short-lived, and up to 75% may die before reaching one year of age; most don’t live past year two, but a few old birds are known. One study, conducted over a 20 year period in Utah, found an owl that lived to be 8 years old, and the oldest known Barn Owl lived 34 years. It is possible that Barn Owls live longer in other parts of the world. Most age studies come from the Northern Hemisphere and no age studies have been done from tropical populations. Historically, Barn Owls are mostly tropical. It appears that Barn Owls moved north as early human populations moved north. The fossil record does not include Barn Owls in the Northern Hemisphere any earlier than the Pleistocene (2.58 million years ago to 12,000 years ago). Perhaps northern populations, while surviving well, are at their limits with respect to some of their physiology and a shorter life is one consequence. We will never know until more thorough studies have been done.

Even though they seldom live more than two years, wild Barn Owls can be quite prolific, especially in years when the prey-base is high. Each female lays 4-9 eggs per brood and 2 broods are not uncommon. In sub-tropical and tropical habitats, some pairs may raise three broods per year.

Raising a brood of Barn Owls can be quite a challenge for the parent birds. Eggs are laid at 2–3 day intervals, which can mean that the first egg and the last egg can be as much as 20 or more days apart. The female Barn Owl begins incubating when the first egg is laid, thus hatching is also spread over a 20+ day period. Imagine tying to feed a brood where the youngest has just hatched and the oldest is nearly ready to leave the nest.

The white underside of a Barn Owl may be easily seen in moonlight if one happens to fly in front of you. This white coloration has caused them to sometimes be confused with Snowy Owls and has also earned them the nickname “Ghost Owl”. This flash of white can be an unexpected surprise, but it it is likely that a more eerie encounter would be to only hear the voice. Barn Owls do not have a deep hoot like Great Horned Owls, and they don’t softly whistle or trill like Western Screech-Owls. Instead, they have a prolonged hissing-scream. Should you hear one over your shoulder at night, it is a sound that will certainly get your attention, and may send chills up your spine.

If you live in a suburban neighborhood, you will likely need to travel to a rural, open area to find Barn Owls, but you don’t need to go far. Those of you that live in open regions might want to consider finding an appropriate location for putting up a nest box. You may be well-rewarded by having the opportunity to observe these beautiful owls, and know that any population of small rodents will be kept in check by an excellent natural control.