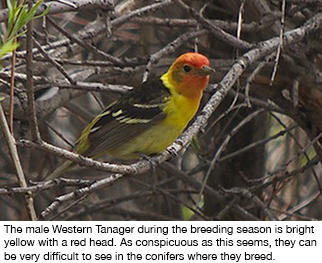 If you have never seen a male Western Tanager in its adult breeding plumage, you will be very impressed when you do finally see one. And, if you have seen tanagers before, you will still be impressed. The male is a very remarkable-looking bird, sporting black wings on a bright yellow body and a brilliant scarlet red head. Sometimes people think that they have seen a parrot or that they need to travel to exotic locales to see such colorful birds, but the Western Tanager, as well as some other birds, certainly dispel that idea. Yet, for all their bright color, tanagers are often overlooked, and females especially so, even when in conspicuous spots. While the male is spectacular in color, the female is just the opposite, being mostly a dull, dingy yellow in color. Like females of many other species, she needs plumage that does not draw attention to her while she sits atop the nest tending eggs or young.

Western Tanagers are birds of coniferous and mixed woodlands. They prefer to remain within the cover of the foliage where it is shady and they can hunt insects while staying mostly unnoticed. They call and sing regularly but unless you know their vocalizations, you might easily pass them by. The male’s song is very much like that of a robin, but a bit raspier and less varied. The song of the two species are easily confused, as I’m sure many of my past students will tell you. Occasionally, a tanager will fly into the open to snatch an insect from the air, but more often, they seek food in areas where cover is found so they are not as exposed. Additionally, tanagers tend to remain high up in the trees and less often come near the ground. They are also not attracted to feeders and thus, are not typical “backyard” birds.

Western Tanagers spend the winter from southern Mexico to northern Panama. A few arrive in our area by mid-April but most arrive in mid-May. When they first arrive is when they are most frequently seen by the casual observer. Some years, large numbers of tanagers arrive within a few days of each other, and they can be seen in parks, lawns, backyards and in the trees lining the streets where they are easily spotted. It is times such as these when many people will get their first look at a Western Tanager and are surprised to learn that this is a common summer resident throughout much of Oregon. Soon, the birds will continue their journey north or spread out into the coniferous woods to breed.

Like many other neotropical migrants, the Western Tanager is really a bird of the tropics that comes here only to breed. We consider it one of “our birds,” but for 7-8 months of the year, it lives in Central America where it lives on insects and a variety of berries and other fruits. As the breeding season nears, tanagers move north, some as far north as northern British Columbia. A similar pattern is found in the other North American tanagers, although none of the others (Scarlet, Summer and Hepatic) are found in the west nor do they go as far to the north for breeding. Males usually arrive on their breeding grounds a few days before the females and begin establishing territories. When the females arrive, they carefully inspect these potential breeding sites, apparently assessing the quality of the site for nest construction and breeding. Females will build the nest but her mate will always stay nearby, following wherever she goes. Both sexes are very attentive as parents and males have been observed attempting to feed young immediately after hatching, even before they have had a chance to dry off after leaving the moist confines of the egg. Only one brood is raised per year, and by the end of August or early September, most tanagers have once again left our region to return to their home in the tropics. 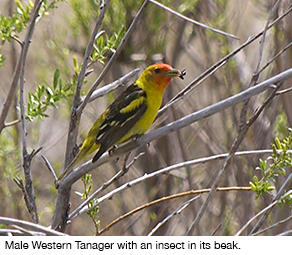 During the breeding season, Western Tanagers eat a few fruits but they mostly prefer to dine on insects. When large-winged insects are caught, such as dragonflies, butterflies or moths, the tanager will usually hold the insect and carefully remove its wings, and sometimes the head, and discard them before eating the body of the insect or giving it to their young. There are a few reports of tanagers finding cherries to their liking and causing some damage to a farmer’s crop. This is not typical but has occurred with enough frequency that tanagers were sometime slaughtered by orchardists in the early years of the 20th Century. Fortunately, they are no longer considered enemies today.

There remains much about Western Tanagers that we still do not know, but new evidence is coming to light each year. Like many songbirds, tanagers are nocturnal migrants and most migrating songbirds have calls that are heard only at night during migratory flights. No such vocalizations are known for tanagers. We presume that they have such calls but humans can’t hear them because tanagers fly too high to be heard from the ground. It has also been discovered that adult tanagers, once they leave our region after breeding, stop in portions of the southwest and northern Mexico where they remain for several weeks while molting their plumage before continuing their journey south. Immature birds remain in their breeding region to complete their molt before beginning their first southward migration.

Western Tanagers are also unique in some of the pigmentation for feather color. In most birds, bright reds yellows and oranges are caused by carotenoids, plant pigments obtained from the birds’ diet. In male Western Tanagers, the bright red head is also caused by pigments obtained in the diet and incorporated into the feathers as they develop, but the red head is not from carotenoids, but from a pigment known as rhodoxanthin. This pigment is found in the buds of some conifers. The Western Tanagers feed on insects which have eaten the conifer buds and taken up the rhodoxanthin which in turn, gets passed along to the tanager and is incorporated into the feathers of the head as they develop and grow, turning the head a bright red. This is unique to Western Tanagers. Other North American tanagers (Scarlet, Hepatic, Summer) all have red color caused by carotenoids.

As a group, tanagers are found only in the Americas, mostly in tropical regions, and many species are very brightly-colored. New genetic evidence has determined that the four species of tanagers found in North America, including our Western Tanager, are not closely related to other tanagers in the tropics and, in fact, should not be considered tanagers at all. Their closest relatives are really cardinals and grosbeaks. We still call them tanagers, but rather than referring to a specific family of birds, “ tanager” is now a more general term, like sparrow or finch.

Whatever we choose to call them, Western Tanagers remain one of our most colorful birds and their arrival is a sure sign that summer is near. If you have not seen one, seek them out in some nearby coniferous woods, Eugene’s Hendrick’s Park, for example. Or join a birding field trip such as those offered by Lane County Audubon Society on the third Saturday of each month. A male Western Tanager is always a rewarding sight, even for the most experienced of birders.