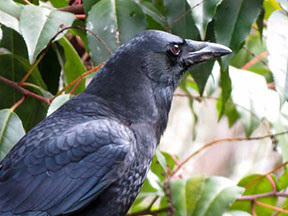 Many people have strong feelings about crows-they either love or despise them. I'll state now that I place myself among those who greatly admire crows and find them endlessly fascinating. Crows' behaviors differ from population to population, so what you observe about them in one part of the country may differ in another part of the country. So, what you like or dislike may differ as you observe different birds. One interesting thing that is consistent is that crows almost never show any aggression toward other crows.

Male and female crows look alike, having black, shiny plumage. Recently fledged youngsters will often have blue eyes and a reddish, fleshy gape at the base of the bill. The inside of fledglings' mouths are bright red when they open them, which is thought to enable the parents to quickly find the mouth to provide food. (Photo below: Young crow showing reddish gape (edge of mouth.) 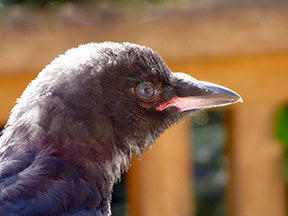 Crows can be hard to attract to feeders, but using WBU's Bark Butter, Bark Butter Bits, cylinders, and suet may bring them in. However, they are wary of people so they may take flight as soon as they see you approaching the window to observe them.

There are many species of crows world-wide, but the most common species in North America is the American Crow. It's the only crow found in Oregon, and its larger cousin, the Northern Raven, also occurs state-wide.

Some people's dislike of crows is due to their loud vocalizations, which can sometimes be disruptive. They do sometimes rob eggs or young from other bird's nests and steal tidbits of pet food left outside. They also seem to know that there might be a few French fries left in our trash bins. And, they are capable of creating mischief, but that is also what can make them delightful. 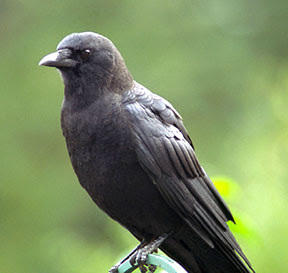 Crows and their relatives (the Corvids: ravens, jays, magpies and nutcrackers) are some of the most intelligent birds on the planet. The more we learn about these creatures, the more we discover how complex and intelligent they really are.

John Marzluff, at the University of Washington, discovered some fascinating things about crows. He learned that crows recognize individual people by look and behavior. When he and his assistants handled young crows to weigh, measure and mark them, they wore an "ugly-face," a caveman mask. The crows weren't hurt in any way, but they disliked being handled and learned to recognize the ugly-face as a "bad" person, someone to distrust and drive away. Whenever anyone walked around campus wearing the mask, crows would follow and call loudly, alerting other birds to the presence of the disliked person. This happened even if the person did nothing but walk around. No other person was given this treatment, only the person wearing the ugly-face. And it didn't matter who wore the mask: all were harassed and the crows made efforts made to drive the person away. 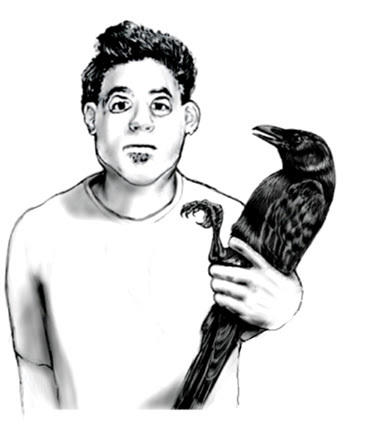 There is still much to learn about these birds but one thing that we are beginning to understand that crows clearly communicate ideas or concepts to each other. The University of Washington campus crows somehow communicated to neighboring crows that anyone with the ugly-face was bad. When researchers wore the mask in another neighborhood, where crows had never been handled, crows there reacted with the same noisy alarm as did the campus crows. Despite these crows having had no experience with the masked person nor any reason for dislike, whoever wore the mask was treated like the mask-wearer on campus. When this was tried in a neighborhood far from campus, where crows had no contact with campus crows, there was no response. As far as the crows were concerned, this was just another person. But crows that had communicated with campus crows had the same negative association as campus crows. This type of communication is quite remarkable and goes beyond what could be expected of other animals, including dogs.

Some animals use objects as simple tools, such as monkeys learning to crack hard-walled seeds with a rock. But modifying  something to serve a deliberate purpose-making a tool- requires a high degree of intelligence. Crows have been observed modifying twigs, shaping them to use as a pry bar to extract otherwise unreachable food and saving them for later use. There are many observations of crows putting hard objects, such as hard-shelled nuts or clams onto a roadway, then stepping aside as a passing car breaks the object. Once opened, the crow rushes to grab its treat. They also learn a variety of vocalizations, using one kind of scold for a hawk or owl, another for a neighborhood cat, and even some soft begging calls that entice people to put out food.

Young crows engage in a variety of play, pouncing on one another, rolling on the ground and tossing objects. Even adult crows sometimes play, perhaps approaching a neighborhood cat and pulling its tail. We once watched as a crow foraged in our rain gutters for hazelnuts dropped by other crows or jays. While scraping its beak through the gutter, a hazelnut rolled and fell down the downspout. Clattering as it fell, it popped out near a squirrel who jumped, startled by the nut rolling out. The crow saw the squirrel's reaction and immediately found another nut, carried it to the downspout and dropped it in. It then looked over the edge to watch what the squirrel did. It repeated this action three times until the squirrel showed no more response. 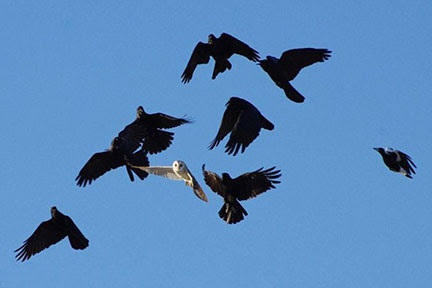 Crows are also known for their mobbing behavior. If you hear a loud, constant cawing of crows, watch what happens as they gather. Usually, they have discovered a hawk sitting in a tree. Their intent is to make all others aware of the hawk to eventually drive it away. As the frenzy continues, crows fly in from all directions and soon the neighborhood is filled with their loud cries. Many sit in nearby trees, taking turns diving on the hapless hawk until it finally leaves, still pursued by crows.

American Crows don't breed until they are at least two years old and most wait until they are 4-5 years of age. Young crows often stay with their parents and help raise the current year's young. They may do this for 3-5 years. They build large stick nests in trees so they cannot be attracted to a box.

Their intelligence and adaptability make crows some of the most fascinating of our urban fauna. If you grow to understand the calls as "language" and watch their behaviors, in time, you will be rewarded to see interesting crow behaviors that you may not have previously seen. Give them a chance to prove to you that they are not as dislikable as you may have thought.