The House Finch is a common bird seen at home bird feeders. The male is striking with red feathers on his breast, rump and much of his head, including part of the crown and above the eye. The female lacks the red color and is streaked with brown. If you have been feeding birds for any length of time, you will almost certainly have had visits from House Finches. They love seeds, especially sunflower seeds. They are almost exclusively seed-eaters but may eat a few buds and some fruit on occasion. Insects are rarely eaten and account for only about 2% of the diet and it is believed that most insects consumed are not deliberately caught, but are accidentally eaten because they are on plant material the finch is eating. 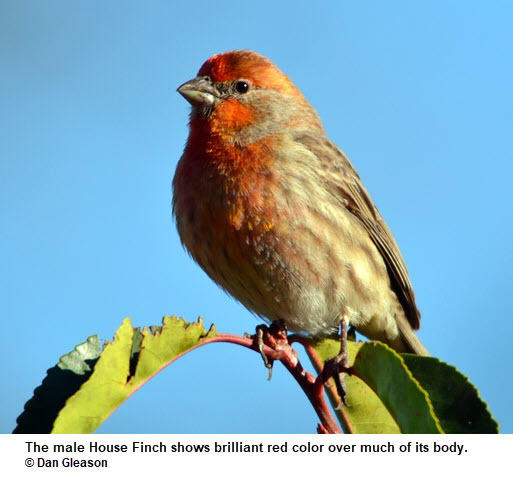 House Finches are native to the western United States, and were illegally introduced as cage birds on Long Island, NY in 1940. Many of these House Finches escaped or were released, and they quickly spread across the eastern U.S. and westward and today are found in most parts of the country. They mostly occur in urban and suburban areas, especially in the East. Their native range in the west includes many agricultural lands and wooded thickets, but they avoid dense, old forests.

Highly social and tolerant of other birds, including fellow House Finches, they only rarely have minor squabbles, jostling against one another at feeders, or occasional spats between rival males during the breeding season. In most populations, there are many more males than females, so numerous males remain unmated during the breeding season. This lets the female be very selective about her mate choice, and she is very particular, preferring only the reddest of the males.

The red feather color in male House Finches is highly variable and is obtained from eating plant materials that contain carotenoids. Carotenoids are not made by animals, so House Finches (and other birds) can only be red if they obtain these pigments in the diet. These pigments become incorporated into the growing feather, and once the feather is fully formed, the color cannot change. Males with bright red feathers are eating higher quality food, so by selecting redder males, the female selects a mate that will bring better food for her and her growing young.

Additionally, carotenoids are used by the immune system. If a bird is ill or heavily infested with parasites, some of the carotenoids eaten will be diverted for use by the immune system making less available for feather coloration. So, if a female chooses a redder male, she is also selecting a healthier mate. Assuming such a male stays healthy, he usually retains the same mate in succeeding breeding seasons. Pairs that have had successful breeding seasons are much more likely to stay paired in subsequent breeding seasons than pairs that experienced nest failure. 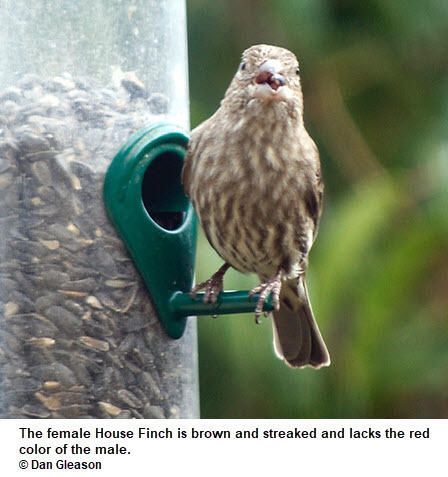 Nest building usually begins in March with eggs laid by late March. Females can continue producing eggs until mid-July, however, and frequently pairs will produce two or even three broods in a season. There are records of females laying up to six clutches of eggs in a season, but there are no known successful broods raised beyond the third. Sometimes, a female will use her first nest to lay a second set of eggs after the first brood has fledged, but often, she begins building the second nest before the first set of young have left. The male is kept busy by bringing most of the food for his mate and all of the food for the young. This high rate of reproduction correlates with a high mortality rate of juveniles, higher than most songbirds.

When the breeding season is complete, the birds may often wander over a wider range than during breeding, but House Finches are not migratory in their native range. In the East, there are some populations that show some migratory habits, but not all populations show this pattern. Even though there is some dispersal during the winter, most pairs usually return to their past breeding area and they sometimes build a nest within inches of their past year’s nest.

Once you begin feeding and attracting birds, you will soon become acquainted with the House Finch. They may visit only occasionally in the breeding season when natural food is plentiful, but as fall approaches, the number of birds you see each day will likely increase.

House Finches can easily contract some diseases that can be spread while feeding in social groups at feeders. To help prevent this, be sure that your feeders are kept clean and the seed is kept dry. This is especially important with platform feeders where disease can be spread through fecal droppings. With these precautions and a steady supply of seed, you'll find House Finches to be attractive birds that are a welcome addition to any backyard.