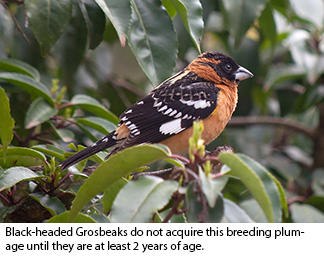 Black-headed Grosbeaks are common summer residents in much of the western United States frequenting a wide diversity of habitats from deserts to forests. In western Oregon they usually breed in woodlands, but before and after breeding, they may be found almost anywhere, including your backyard, visiting seed or suet feeders.

Mexico is where Black-headed Grosbeaks spend the winter, but in spring they move northward and are common in Oregon by mid-May. Upon arrival they frequently visit feeders before dispersing to nearby woodlands to breed. These nearly robin-sized birds are very colorful and attractive visitors. Males have a black head, as the name implies, with black wings and tail, each with contrasting white spots, and bright cinnamon-orange breast and underparts. Females are much paler and instead of a black head, they have a pale stripe over each eye and over the crown. In addition to their bright plumage, these birds have a wonderfully full, rich melodic song, that for some people, nicely marks the arrival of spring.  After the breeding season, Black-headed Grosbeaks once again appear at neighborhood feeders, eating large quantities of seed, especially sunflower seeds, storing up fat in preparation for their fall return journey to Mexico. 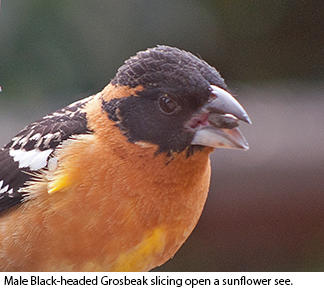 Grosbeak simply means "large beak" and Black-headed Grosbeaks indeed have a large, conical beak. This heavy beak provides a place for large, strong muscles to attach. Such muscles allow these birds to cut through heavy-walled seeds to access foods unavailable to many other birds with weaker beaks. It also assists with capturing large, hard-bodied insects, such as beetles, spiders and the large larvae of many moths and butterflies. Grosbeaks occasionally eat snails since their large beak can easily crack a snail's shell.  About 45% of their diet is from vegetable sources. Large grains like wheat and oats can easily be eaten as well as fruits such as blackberries, crabapples, elderberries and cherries. To many people's surprise, poison-oak berries are also sought after. Grosbeaks can also quickly strip a cherry tree of its fruit, much to the dismay of the fruit grower. During the winter months, many Black-headed Grosbeaks share habitat with Monarch butterflies. Because of what they feed on, these butterflies are toxic to most predators, but Black-headed Grosbeaks are an exception. The bright colors of the butterfly are a warning to predators that they are not good to eat. Birds who ignore this warning and eat a butterfly quickly spit them out because of the strongly bitter taste, but Black-headed Grosbeaks don't mind the taste.  After eating several they usually wait eight days before eating them again, allowing the grosbeak's body time to eliminate the toxin.

Most songbirds reach full adult plumage by the end of their first year. Black-headed Grosbeaks are unusual in that males take two years to reach their full adult plumage. Juveniles (a bird out of the nest who has not yet reached its first body molt in the fall) and most first-year males look much like females. But, there is a lot of variability. Some first-year males look much like females, but a few males look more similar to fully adult males with only a few subtle differences. These males may find a mate and breed during their first year of life, whereas first-year males that are more female-like in appearance, will not be able to successfully breed. 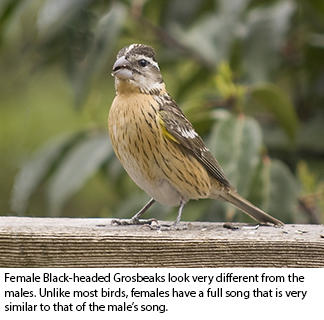 A few grosbeaks arrive on the breeding grounds having already found a mate during migration, however, most will find a mate after reaching the breeding grounds. We get the benefit of their beautiful song as arriving males frequently sing to establish territory and attract a mate. Black-headed Grosbeaks and their eastern counterparts, the Rose-breasted Grosbeaks, are two species of birds where females also sing. In most songbirds, females vocalize for a variety of reasons, but very few have what we consider a true song. But these grosbeaks do: female song is similar to the male's song, but often shorter. Later in the breeding season the female sings a song as rich and full as the male's. Oddly enough, she often does this from in or near the nest. Why? In most songbirds, as the male wanders away from the nest in search of food, he may mate with another female. No bond is formed, it's simply a way to spread his genes as widely as possible.  And it's not just males, females do likewise as well. But, such extra-pair coupling behavior is completely unknown in Black-headed Grosbeaks. By singing on or near the nest with a song like a male's song, the female keeps her mate near home seeking an intruding male he thinks he hears. The female may be singing to keep her mate close to home and faithful to her that season.

Black-headed Grosbeaks are wonderful avian neighbors to enjoy while they are here. Their song is wonderful to hear and their bright plumage makes them enjoyable birds to watch. Late summer is the perfect time to look for them visiting your feeders. They love sunflower seeds but will also take some suet. Enjoy them while you can as they arrive in the spring and again as fall approaches when they will soon return to Mexico.