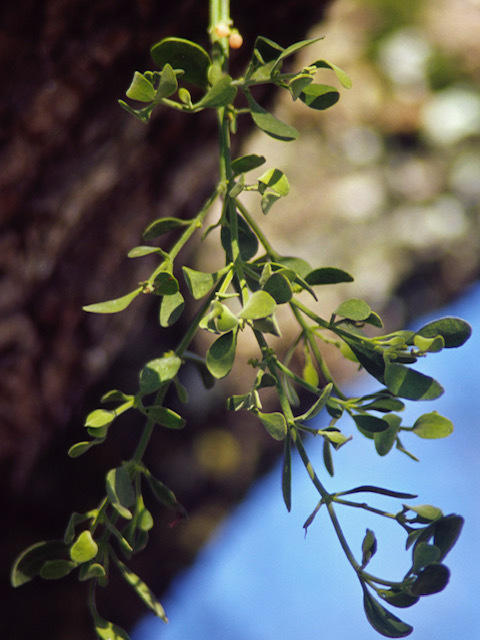 We often associate mistletoe with Christmas during the holiday season. But aside from a sprig hanging above the doorsill, most people do not know what mistletoe really is, or what it has to do with birds. The family of plants that contain mistletoes is a large one so there are a great many kinds of mistletoe found around the world. Most are parasitic or hemiparasitic. (hemi = half). A hemiparasitic plant can photosynthesize to produce its own energy but it draws some nutrients and water from its host plant. 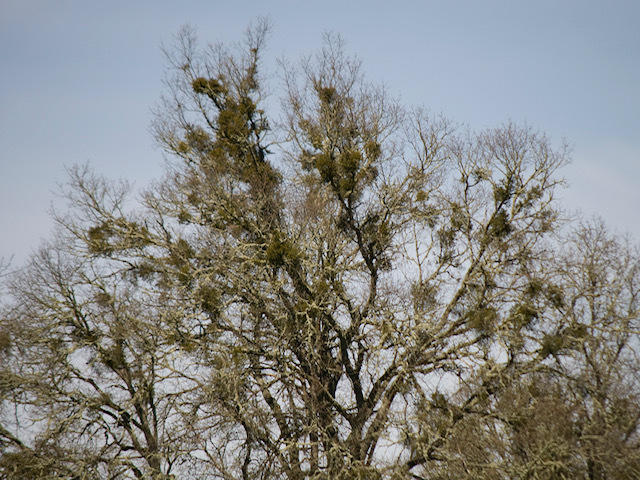 The common name mistletoe was first applied to European mistletoe, Viscum album which is native to the British Isles and much of northern Europe. It is not found in North America, although it was introduced in California in 1900. There are other mistletoes native to North America, but the species we are most familiar with, especially in the west, is Phoradendron villosum. It is sometimes referred to as Oak Mistletoe because it is a common parasite on oaks, especially White Oak, Quercus garryana. You may hear it said that you should remove mistletoe infestations from oaks (trim off the branches where it starts to grow) because it will harm the tree. A large infestation may damage or even kill an individual tree, but the relationships in ecosystems like oaks are not simple and removing all mistletoe may be detrimental. In fact, when restoring oak habitat, it is now usually suggested that some mistletoe be introduced as well. In stands of oaks with significant mistletoe, the overall diversity of wildlife is increased over those without.

Western Bluebirds can eat large quantities of mistletoe berries during a summer. In fact, they are the primary vector for transplanting mistletoe from oak to oak. The seeds inside the fruit* are sticky and, as the birds eats the mistletoe berries, the seeds can stick to their beak. *Actually, the mistletoe berry is a drupe with a single seed, like a cherry.

The birds wipe off the residue from eating the seed on a nearby oak branch. There the seed germinates, and a new mistletoe plant begins to grow on the oak. These mistletoe fruits are important to bluebirds and other birds eat them as well. But, where there is an abundance of mistletoe, bluebirds are more successful. 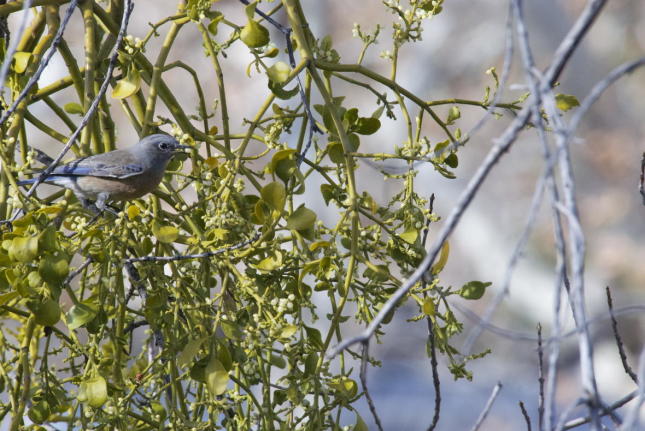 An interesting study on bluebirds was done in Berkeley, California, a few years ago. It was discovered that Western Bluebirds often stay in family groups and the family members often breed near each other in successive years. By fall, most of the new females that have been raised that year will usually have dispersed, but young males often stay with their parents through the winter. There is a direct correlation between male dispersal and food availability. In this study, the researchers removed over half of the available mistletoe berries in one area. In that region, the young males soon left to seek other food resources. In areas where mistletoe berries were numerous, the young male bluebirds remained with their parents, demonstrating the importance of this food to the birds.

Another plant often associated with Christmas is holly. Holly is native to the eastern United States, but it is not native to the west. Birds love holly berries, so some people suggest planting holly to attract birds. However, this is not advisable here in the West where holly is not native. It can be mildly invasive, but there is another problem with holly in forested regions. Holly plants, especially young plants, can take up large quantities of water, more than many native herbaceous plants of our forest understory. This greater water uptake can make it difficult for our native herbaceous plants to obtain sufficient water, especially in times of drought. So, holly is best left as ornamental branches, not a growing tree with berries available to our birds.