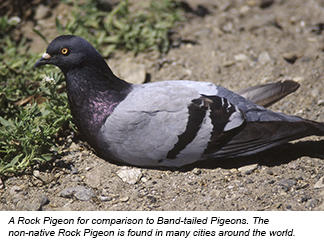 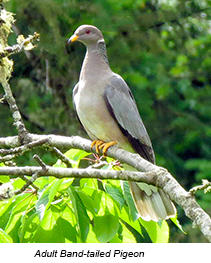 Everyone has certainly seen pigeons wandering around in cities all over the world. They are on our sidewalks, parking lots, city parks and elsewhere. These are Rock Pigeons (formerly called Rock Doves). They are native to Europe, North Africa and portions of Asia and were introduced into North America by colonists in the 17th Century. Perhaps less familiar to many people are the pigeons that are native to North America: The now extinct Passenger Pigeon and the Band-tailed Pigeon. (Pigeon is a term used for the larger members of this family of birds and dove is the term used for the smaller family members, such as Mourning Dove.)

You have probably heard of or read about the now-extinct Passenger Pigeon. This species was the most numerous bird to ever occur in North America, with estimates of 3–5 billion individuals. Accounts of their numbers can be difficult to believe. In 1806, Alexander Wilson wrote about a flock that he had witnessed in Kentucky, stating the flock of birds stretched, “from right to left as far as the eye could reach…” and flew over continuously for 5 hours! He calculated that, based on 3 birds per square yard (a number he considered too low), the flock totaled 2,230,272,000 birds and stated that he believed this to be far less than the actual number seen. These birds easily numbered in the billions and it is thought that nearly the entire population roamed as one giant flock. It is hard to believe that such vast numbers could be hunted to extinction. Once the population fell below a certain critical number, the birds were unable to recover and continued their decline to extinction. The last Passenger Pigeon, named Martha, died alone in the Cincinnati Zoo in 1914. 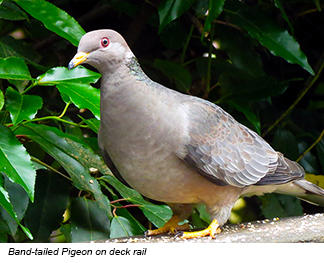 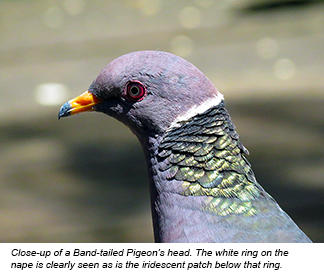 Since Passenger Pigeons never occurred in Oregon, our only native pigeon is the Band-tailed Pigeon, which ranges from southern Alaska to South America. One sub-species is found from Mexico into the American Southwest as far north as parts of Colorado; a second sub-species ranges along the west coast, west of the Cascades, including all of western Oregon. This sub-species is the largest pigeon in North America Most of Oregon and Washington’s Band-tailed Pigeons inhabit coniferous forests, but they can be found in many diverse environments, including cities. I have seen Band-tailed Pigeons along the sidewalks and nearby trees in Beverly Hills, California behaving much like the non-native Rock Pigeon. 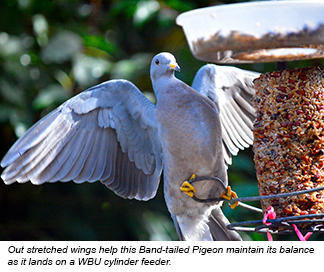 Since they typically inhabit coniferous forests, many people are not acquainted with these birds. However, they are sometimes attracted to feeders, especially in rural areas near forests. When first appearing at one’s feeder, it can be exciting to see this large and attractive pigeon. But, their numbers can quickly grow and may reach 30–40 birds, at which point they quickly wear out their welcome. Large numbers of pigeons will consume prodigious quantities of seed, prevent other birds from feeding, and the weight of so many large birds can even break some feeders or their supports. It is rare to see more than 30, but up to 900 birds were once reported during migration in Washington.

Band-tailed Pigeons are exclusively vegetarian, eating grains, nuts, acorns and wild fruits, and they regularly visit mineral springs, especially in western Oregon, to obtain sodium. They migrate through western Oregon to southern California, where most of our pigeons will spend the winter, but a few birds remain and can be found in small wandering flocks during the winter. 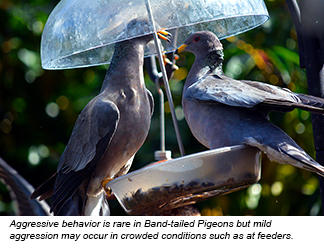 Most of the literature suggests that Band-tailed Pigeons are peaceful birds showing little or no aggression, even when crowded together at feeding stations. However, I have seen some aggression among these birds while feeding. When several pigeons crowd together in the limited space of a small feeding tray, Band-tails will then sometimes make grunting sounds and push against another bird. The aggression is mild with no bird harming another, but still not totally peaceful. 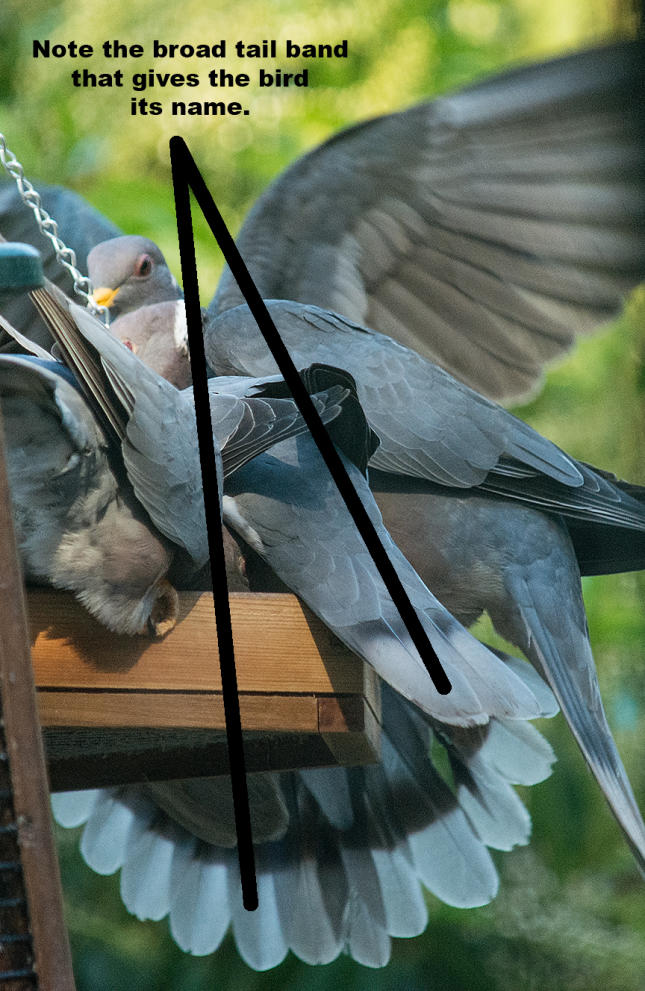 It is not known for sure, but we assume that most Band-tailed Pigeons form monogamous pairs, at least during the breeding season, and it is believed that pairs form during the winter or during migration, because breeding begins immediately upon arrival to the breeding grounds. Male and female both gather twigs to build the nest, although most nest construction is done by the female. The nest, usually in a conifer, is very flimsy-looking and often the egg can be seen by looking up through the bottom of the nest. The female lays only one egg, which both adults will take turns incubating. Once hatched, both parents will brood and feed the single chick. For the first few days, it will be fed what is known as “crop milk.” This secretion is from the crop of the adult and is very similar in composition to mammal’s milk, but unlike mammals, it is formed in the crop and is produced by both male and female. Once the chick has fledged and left the nest, the adults usually start to build a second nest and many pairs will often build a third nest, especially those pairs found in the Oregon coast range. In Oregon, most breeding occurs from mid-May through the end of June, but nest records are known at all months of the year in the tropical portions of the bird’s range. 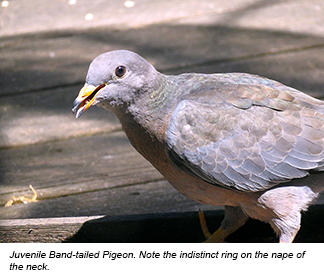 Band-tailed Pigeons are slightly larger than the non-native Rock Pigeons and they have a very strong and direct flight. They are a subtle purplish color over the back with a white collar above a black, iridescent, scaly-looking patch on the back of the neck. These features are absent or very pale in fledglings. Their name comes from the broad pale brown band seen on the underside of the tail when it is spread.

You may find Band-tailed Pigeons in town, in some wooded portions of the city. Hopefully, you will be able to appreciate their beauty and yet not be overwhelmed at your feeders with such large numbers that they become unwelcome.