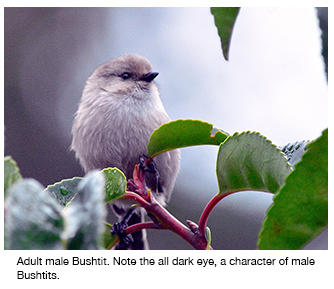 Bushtits are some of our tiniest birds, only a bit longer than three inches and weighing less than 2/10 of an ounce. They are found only in western North America and range as far south as Central America. They are highly social birds at all times of the year, and flocks of 10-40 birds will remain loosely associated with each other all year long as they wander across their territory.

Watch as a flock comes through your yard. These tiny birds are constantly on the move, seldom stopping for long, making it difficult to see them in detail or even count how many are in the flock. They are easily attracted to suet and it is while feeding on the suet that may be your best chance of seeing them well. 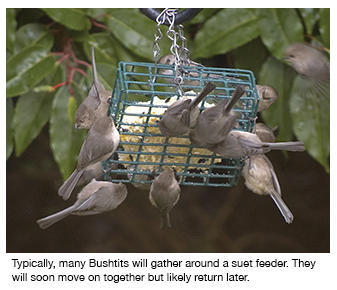 Bushtits that are found in Oregon are gray in color, and male and female look alike except for eye color. Males have all-dark eyes and females have a light-colored iris surrounding a dark pupil. Plumage variations are found in different geographic regions, however. In the southwest, many males have a black mask across the face and the males in Central America all have the black mask. These birds were once thought to be a different species and you may find them called “Black-eared Bushtits” in some older field guides. In most field guides, you will most likely find Bushtit illustrations located near those of chickadees.

While they do bear some resemblance to chickadees, current genetics research shows that they are probably more closely related to gnatcatchers and swallows than they are to chickadees. They are the only member of their family (Long-tailed Tits) found in the New World.

Bushtits eat insects and spiders that they glean from the surface of vegetation. Most of their prey is small enough to be easily grabbed but they do sometimes take insect larvae, like caterpillars, that are too large to easily handle. When this happens, they beat the larvae against a branch until it is limp or dead and then proceed to eat it. They eat any seed that you put out, but you can usually attract them with suet cakes, especially during the winter months. 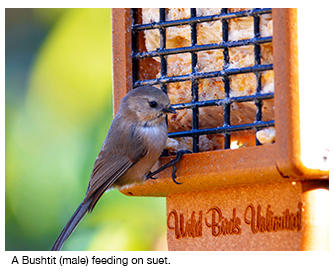 This was one of the first bird species ever described as having nest helpers: non-breeding adults that assist breeding pairs with feeding and raising young. This behavior varies geographically and is much more common in southern populations and much less common in Oregon and California. Typically, over 70% of these helpers are males, either unmated or those that have lost their mate. In the areas of the southwest and in Central America where this behavior is most common, there are usually more males than females in a given population and during the breeding season, nest-helpers are the norm, rather than only the two parent birds doing the work of raising their young. 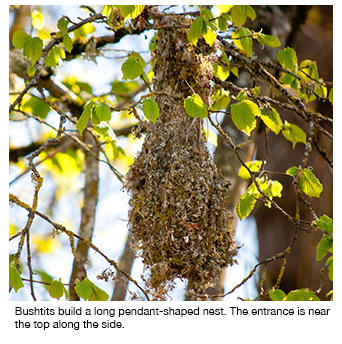 The nesting season for Bushtits lasts from mid-March through June (and is earlier in the southwest) but some nest construction can start as early as February. During this time, the flock remains in the territory but the individuals become less tightly associated with one another. Usually a single male and female from a flock will work together to build their nest and together, they defend a small territory near the nest, but less vigorously than do other kinds of birds. Once the eggs are laid, this area is no longer defended and other adults are allowed in and may even enter the nest to steal nest material for their own nest.

Nest construction begins with the collection of spider webs which the birds then attach to selected branches, sometimes starting nests in several nearby locations before settling on one to complete. Once there is enough web material to support a nest structure at one site, that site is used and the nest is constructed to completion, abandoning the earlier starts. Both male and female continue to work on the nest using spider silk and soft plant materials, and the final nest is a marvel of avian construction. Tightly woven, it hangs like a silken sock or gourd from the branch, with the entrance hole on the side near the top where the nest is attached to the branch. It looks much like a soft slipper hanging by its heel. Four to eight eggs (six is average) are laid in the bottom of the nest and both parents share incubation duties for 11-12 days before the eggs begin to hatch. The young are ready to fly after about 18 days when they will then leave the nest. 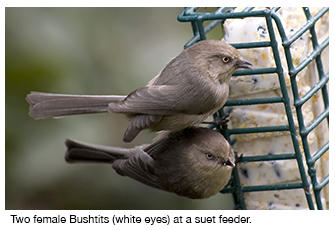 These same parents will often raise a second brood in the same nest, but even if another brood is started, the adults still faithfully feed their first youngsters for at least two more weeks. During this period, you may see the young huddled together on a branch waiting to be fed. Such gatherings may include fledgling from other nests that are attracted to the newly emerged young.

As nesting season comes to an end, the flock begins to gather together more closely to continue their group feeding forays through neighborhoods. If you are lucky enough to find Bushtits nesting nearby, then watch for them to do so again next year. Although, they will not usually reuse the same nest from year to year, they will nest in the same general vicinity.

These are delightful birds to watch. If you have a suet feeder that they have discovered, you will see one or two birds come to feed from it. Moments later, the whole flock will suddenly descend upon your feeder, taking small bits of suet. As quickly as they appear, they will move on their way to find other foraging sites within their territory. But don’t despair, for they will very likely return within the hour to feed again.