The Story of Birds and Hot Pepper

Suet attracts many kinds of birds that we enjoy seeing in our yards. Unfortunately, squirrels often also find suet attractive and they can dominate the feeder, keeping the birds you want to see away. One solution to this problem is to use a suet that contains hot pepper. 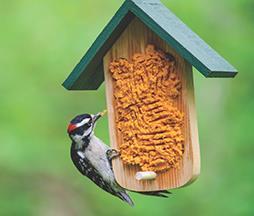 The idea behind using hot pepper is that mammals, like squirrels, dislike the hot taste and avoid it, but birds show no response and continue to eat the pepper-laced suet. It works well, but why?

It would be easy to assume simply that mammals taste the hot pepper and birds do not, but that would be incorrect because birds can taste pepper. The answer is more complex and interesting to understand.

The hot reaction is caused by a compound called capsaicin which is produced by plants of the genus Capsicum. Capsaicin is most concentrated in the tissues surrounding the seeds (on the inside of each pepper). It triggers taste receptors found in birds and mammals. But it also stimulates a certain kind of pain receptor found in mammals but not in birds, and that’s why birds have no adverse reaction to eating peppers. In mammals these pain receptors are found throughout the body, not just in the mouth, which is why it is recommended that you wear gloves when peeling and handling jalapeño peppers, for instance. It seems contradictory, but capsaicin can also reduce some types of pain. We use it to relieve muscular pain with creams or liniments that induce a hot/cold response on our skin.

Birds lack the hot response, but there is some evidence that some birds are very attracted to the taste. This is to the pepper plant’s advantage. The red of the chili pepper serves as a warning to mammals—“Don’t eat me; you won’t like it.” But the red color is attractive to birds. From the plant’s point of view, if a mammal, like a squirrel, were to eat the pepper which contains the seeds, it would use its molars to grind the seeds. This might be nutritious for the squirrel, but it destroys the progeny —the seeds — of the plant. On the other hand, birds will swallow the seeds whole and disperse them in their droppings. However, the situation is even more complex than this.

Seeds of many plants are subject to being eaten by animals or attacked by pathogens, such as fungi once they are released and on the ground awaiting germination. For pepper plants, there is a bigger advantage than simple dispersal of seeds by birds. As it turns out, seeds of chili peppers that pass through the digestive system of a bird germinate at a rate of 370% higher than seeds that do not pass through a bird’s digestive system! Part of the reason for this is that these seeds are also much more resistant to fungal infections because of protections added by the bird’s digestive system. So, deliberately attracting birds to come and eat the seeds greatly benefits the plant.

But, the benefit to the plant can only occur if the seeds are at the right stage for dispersal and germination. If the bird eats the pepper before the seeds have ripened, there is no benefit to the plant. The plant needs to signal the birds when its seeds are ready to be eaten. The fruit (the chili pepper) becomes red, which birds are attracted to, as the fruit matures. But as the red begins to form, the seeds are still not quite ready to be eaten. Another signal must be sent when the seeds are fully mature. Here is where birds have another advantage over mammals. In addition to red, blue and green, birds also see ultraviolet light, which is invisible to mammals, like we humans. When the seeds are fully mature, the outer coat of the pepper now also reflects ultraviolet light. Red color mixed with ultraviolet looks different than just red to birds, but mammals still see only red. This color combination tells the birds that the pepper is now good to eat. But to mammals, who do not see ultraviolet light, the pepper is still bright red which signals a warning not to be eaten.

Peppers and birds have a close association that benefits them both, and what benefits them, also discourages mammals. Our bird food manufacturers take advantage of this by adding hot pepper to our suet blocks. The pepper bound up in the suet is not free to irritate eyes or other membranes, and when eaten by squirrels is unpleasant and discourages them from eating more.

Since birds do not experience a hot sensation if they taste pepper they will continue to be attracted to your suet. At WBU stores we now also have seed that has been coated with a very high-capsaicin level of pepper extract. (Pepper “flavoring” is used by some other companies, but this is worthless because it is not just the “taste” that triggers the unpleasant sensation and discourages mammals.) The extract is very hot so we recommend using gloves to protect your skin, even if you don’t think you will touch it. (Remember, mammals, like we humans, have the pain receptors but birds do not.) This seed does cost more because it has to be prepared in a totally separate facility where all of the workers must wear protective clothing, but it will deter squirrels, rats, raccoons, bears and other mammals from eating your bird seed. Once they taste it, these mammals will not come back for more. Eventually, you can begin to mix untreated seed to lower your cost and if the mammals stay away, you may be able to abandon the treated seed until you see evidence of them returning.

The story of pepper and birds is an interesting one and gives us a way to protect our bird food from being eaten by mammals when that is desired – and it’s an all-natural way to control undesired pests without resorting to unnatural chemicals.