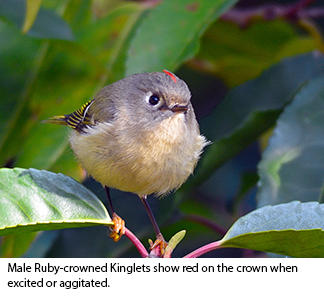 Kinglets are among North America's smallest birds, and both species of North American kinglets, the Ruby-crowned and the Golden-crowned, occur in Oregon. Although both species belong to the same family and look a lot alike, they are not closely related species and have rather different behaviors.

Golden-crowned Kinglets are less familiar to most people because they spend most of their time high in the conifers. Ruby-crowned Kinglets are found in western Oregon and Washington and breed at higher elevations in the Cascades, but they are altitudinal migrants, moving to low elevation in winter where people are more likely to notice them. Interestingly, those Ruby-crowned Kinglets that breed in Alaska and across Canada are north-south migrants, spending their non-breeding seasons in the southern United States or Mexico.  Males from these populations migrate south earlier in the spring and return later in fall than do females, and juveniles migrate even earlier, and leave in fall before either of the adults

Ruby-crowned Kinglets are usually found alone or in mixed flocks with chickadees or wintertime warblers, rather than in small groups of their kind, as Golden-crowned Kinglets do. Although they nest high in the trees, kinglets spend much of the winter low in shrubbery. They appear nervous, frequently flicking their wings and moving quickly from branch to branch. During the non-breeding season, Ruby-crowned Kinglets can easily be attracted to suet products, often seeming quite tame, showing little fear of humans. Their plumage overall is olive-green with dull white underparts, prominent white wing-bars, and a white, incomplete eye-ring. Males have a brilliant scarlet crown but it's usually not visible, unless they get excited or agitated, at which point a bird erects its red crown feathers to serve as a warning or sign of aggression. Ruby-crowned Kinglets are sometimes confused with Hutton's Vireos, the only species of vireo found in Oregon throughout the winter (all other species migrate away in winter). The two species are similar in size and plumage, but there are ways to tell them apart. Of course, if you ever see a red crown, the bird must be a male Ruby-crowned Kinglet because the vireo has no red. But, behavior is often the simplest way to distinguish these two species. Kinglets are in nearly constant motion, hopping from branch to branch and frequently flicking their wings. Hutton's Vireos' behavior is more sluggish, less agitated and they don't flick their wings. If you can get a close look at the feet, Ruby-crowned Kinglets have yellow feet. How yellow varies from individual to individual.

For such a small bird, a male Ruby-crowned Kinglet has a surprisingly loud voice, louder and richer than most larger songbirds. The song is most often heard on the breeding grounds, but in late spring, males can be heard singing for several weeks prior to migration to their nesting territory. Listen for their rich song in late April or early May in wooded or brushy areas. Beginning with a few clear notes, it builds to a crescendo of a rich, full series of rapidly-paced notes.

The preferred breeding sites of Ruby-crowned Kinglets are high in old growth forest conifers. Other habitats are sometimes used, but much less preferred. Because of their association with old growth, past logging of these forests has caused a significant decline in kinglet populations, although this trend has slowed slightly in recent years.

Because their nests are high in conifers these birds can be very difficult to study. As a result, we still know very little about kinglets' breeding habits. We do know that they have a larger clutch of eggs than any other North American songbird, with females in the Pacific Northwest laying 8 to 12 eggs. That's a lot of eggs for one small bird to sit on and incubate, and imagine the difficulties of feeding so many mouths once the eggs hatch. The female does all of the incubation while the male brings her food, mostly small spiders and insects and their eggs, but pseudoscorpions and other small arthropods are also eaten. Once the eggs have hatched, the male continues to do the majority of food gathering because the female is often still brooding newly hatched young. When the young are fully grown by fall, like their parents, they'll add berries, like elderberries and poison-oak, to their diet. Each pair of birds will only produce one brood of young each year. Ruby-crowned Kinglets generally survive our typical mild winters at low elevations in western Oregon and Washington. However, severe and prolonged cold weather may kill many. They apparently lack the ability to store adequate fat reserves like chickadees and other small birds that routinely live in cold weather. During the breeding season, negative impacts to the breeding habitat, primarily logging and fire, take a heavy toll on local populations, and so the number of Ruby-crowned Kinglets we see year to year can vary widely. But some are always present, so keep an eye out for them in winter when they may visit your yard. To attract them closer, you can use suet, or better yet, Bark Butter purchased from Wild Birds Unlimited. Bark Butter is so attractive that I have had them take it from my finger. Once they are coming to your feeding station, watch for that bright flash of red atop the head of the male that gives them their name. These are always fun birds to see in your yard.