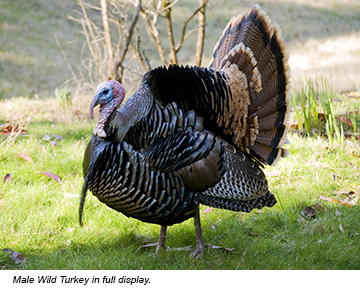 Those of us who live in wooded or semi-wooded portions of the Willamette Valley have likely had some encounters with Wild Turkeys. Even people in suburban neighborhoods are seeing these birds from time to time. Did you know that these birds are not native to Oregon? How it got to Oregon and particularly, to the Willamette Valley, is somewhat unclear. Certainly, there were deliberate introductions by wildlife officials and others, but when and where is not well-documented for all populations.

Wild Turkeys are now found throughout most of the continental United States but their historic native range seems to have been throughout most of the east coast from New England in the north to Florida in the south. The western limits of its native range are not well-defined but appear to have been from Pennsylvania down through Missouri into southern Texas. Another population was found from southern Colorado into Mexico.

When early Spanish explorers reached Mexico in the early 1500s, they found some of the people of eastern Mexico keeping turkeys as a domesticated animal. By the mid-1500s these domesticated turkeys were brought to Europe and widely introduced there as the explorers and their crews returned. From southern Europe, turkeys were eventually introduced into northern Europe. It was there that the name “turkey” began to be applied to these birds as some northern Europeans mistakenly believed that these birds were from the region of Turkey. 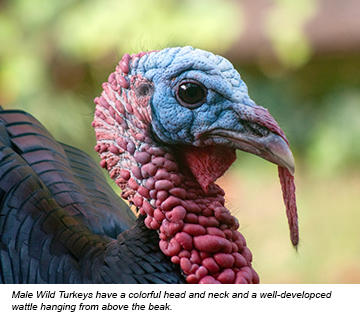 When the colonies were being established in North America, early settlers brought turkeys with them. Wild Turkeys already were present but the colonists released and maintained their domesticated stock as well. In the late 1600s there are accounts about how numerous turkeys were, but by the mid-1800s, the native birds were nearly extinct in eastern North America due to over-hunting. By the end of the nineteenth century, it is thought that only Florida, and possibly some remote areas in the Appalachians, had viable populations of Wild Turkeys in the east. Populations still persisted in Mexico and the undeveloped portions of the southwest as far north as southern Colorado. Reintroductions from wild populations have been very successful during the twentieth century and turkeys are now flourishing and increasing in all of the lower 48 states. Successful introductions have also been made in Hawaii.

The Wild Turkey is a very large, and sometimes aggressive, bird, showing little fear as they wander through suburban neighborhoods. We have watched them chase squirrels, neighborhood cats and even deer. One time, a large buck with a full set of antlers was lying in our back yard in the south hills of Eugene. A group of turkeys came strutting through and the buck originally paid no attention. But one of the turkeys apparently wanted to feed where the buck was resting. We watched as the turkey pecked vigorously against the side of the buck several times. Eventually, the buck got up and left the yard to avoid further harassment. The plumage of Wild Turkeys is an iridescent dark black or brown that almost looks metallic in some light. The feathers are tipped with a rusty-brown color (especially in females). The race of turkeys that originated in Mexico and was brought to the U.S. via Europe, has white tips to their feathers, giving them a somewhat different appearance. It is from these white-tipped birds that domestic white turkeys are descended from.

Wild Turkeys spend most of the day wandering through woodlands in search of food. A few insects or other invertebrates may be eaten but the majority of the diet is plant material. Nuts and grains of all kinds are eaten along with a few grasses or other leafy vegetation in the summer. They also ingest large amounts of grit which is retained in the gizzard to help with grinding food. The gizzard is the rear chamber of a bird’s stomach and is well-developed in seed-eating birds and especially so in turkeys. A turkey has no difficulty in pulverizing hard-shelled nuts such as acorns or, in the East, pecans and hickory nuts. Walnut shells are completely ground after about four hours in the gizzard. Some strange experiments were done on turkeys brought to Europe in the mid to late 1700s. One person reported that 12 steel needles were completely ground up by a turkey in 36 hours and another reported that steel tubing was flattened and partially rolled after 24 hours in a turkey gizzard. 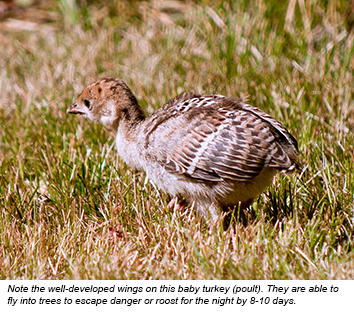 The white muscle of the breast that so many people cherish for their Thanksgiving Day table, is an indication that this bird is not capable of long, sustained flights. Instead, it can make very powerful, quick bursts of flight. (Birds that are long distance migrants have red breast muscles, not white.) In turkeys, flight is most important as a means of escaping predators. While they are strong, short-distance fliers, turkeys prefer to walk as their main means of locomotion. The muscles of their legs are strong, allowing the birds to be swift runners. They are even good swimmers, although swimming is most often observed in young birds attempting to elude danger before their legs have fully developed for running.

Turkeys nest on the ground but once the eggs have hatched, the parents will not directly feed the young so the chicks must follow the adults, learning what to eat by imitation and trial-and-error. At night, turkeys retreat into the forest where they fly up into the trees to roost on a branch. Even though several birds may be clustered together through the night, they are seldom observed by most of us. If you live near woodlands, don’t be surprised if a turkey shows up in your yard one day. They wander over a large area and flock sizes may vary in numbers each day. You may find one or two birds one day and then not see them again for several weeks. When they do return, you may see more or fewer than were present on their last visit. We often have a single bird wander through our yard and we have also had a flock with up to 23 individuals come to stay for an hour or so.

Turkeys will not typically come to your bird feeders, as they are ground-foraging birds. However, we have had some turkeys figure out how to get seed from a feeder if they can reach it. They will feed upon whatever has been scattered on the ground including seed that may have fallen from overhanging bird feeders. They may also cause some damage to your garden. Although they might not eat many of your plants, they may damage or dig them up by scratching and turning the ground in search of food. They can also pose an additional hazard as they have been known to chase pets and even people.

For you trivia-minded readers, you might like to know what to call a group of turkeys. You may have heard some colorful terms for birds, such as “a flight of swallows,” “a charm of finches” or “a wedge of swans,” but the phrase for a gathering of turkeys is “a rafter of turkeys,” ...unless it’s November, in which case the phrase becomes “a death-row of turkeys.”