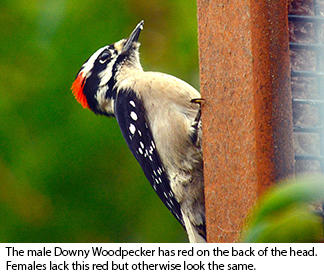 When we put bird feeders out to attract birds to our yards, we often don’t think about woodpeckers. Woodpeckers mostly eat insects, not seeds, and seed-eaters are easy to attract. But, woodpeckers often will feed on suet, and the Downy Woodpecker is no exception.

Downy Woodpeckers are North America’s smallest and most common woodpecker. Found in all states, they are absent only from southernmost Texas and the Southwest. They tolerate human activity and are found in many suburban neighborhoods and nearby woodlands. Working amid the bushes and trees, they tend to be more hidden than some birds, but they are common. 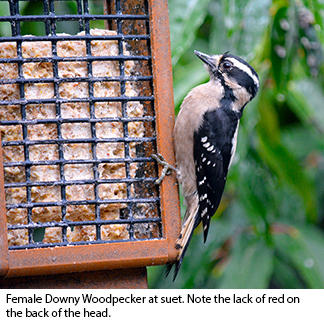 When you see a Downy Woodpecker, look at its head to tell if it’s a male or female. The sexes look alike except that males have a red patch on the back of the head which is absent in the female. If it has red on the top of its head, that is a young bird, recently out of the nest and may be either sex. A Downy seen on small branches and twigs is most often a male as females usually forage on larger branches and tree trunks.

Downy Woodpeckers are non-migratory. Male and female typically stay in the same approximate area year-round, but if food is in good supply during winter, pairs may stay together and continue to defend their territory. But more often, the pair-bond is not active during winter and the pair reunites in spring. A new nest cavity is excavated each year so there are plenty of old holes that get used by other birds and squirrels. Drilling a nest can take from one to three weeks and usually eggs are laid about two weeks later. 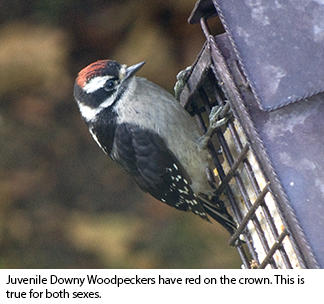 Once the eggs are laid, Downy Woodpeckers make devoted parents. The female does most incubation during the day with the male giving her some relief. But at night, the male incubates, and broods the young once they hatch. Eggs hatch in only 12 days, which is faster than most birds. Young woodpeckers can be very noisy and you can easily hear the incessant cheeping of the youngsters if you are near a nest hole. When 18–21 days old, the young birds will first venture out of the nest on their first flight and once out, they do not usually return to the nest. They remain with their parents for another three weeks begging food and learning how to forage for themselves.

Insects form the primary diet of most woodpeckers, including the Downy Woodpecker. But, about 18% of the diet is plant materials including grains and small fruits, even poison-oak berries. There are even a few reports of them drinking from hummingbird feeders, but that’s not too surprising, because they are known to look for sapsucker wells to drink the oozing sap. In fact, Downy Woodpeckers once were blamed for damaging fruit trees, but they rarely drill deep enough to damage the cambium layer of the tree to cause harm. Drilling nest holes also does little harm to the tree because the places chosen are usually parts of the tree already damaged by heart-rot, which makes excavation easier. 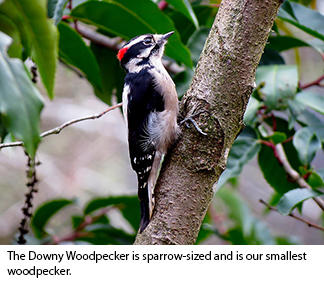 Like many other birds, Downy Woodpeckers are attracted to suet and providing it is an easy way to attract them to feeding stations. They hammer out chunks of suet which they then carry away in their beaks. Suet is a good high-energy food source and is especially helpful in winter. Bark Butter and Bark Butter Bits, which can be purchased at Wild Birds Unlimited, are also very attractive to woodpeckers. During hot weather, be sure to switch to a no-melt suet, also available at Wild Birds Unlimited. Very soft, melting suts can cause problems for woodpeckers. Melted suet can coat the bristles in a woodpecker’s nostrils, leading to eventual loss. Bristles are an important adaptation for woodpeckers and losing them can put them at risk. As a woodpecker drills on twigs and branches, small chips of wood are dislodged, and the tufts of bristles in the nostrils help prevent debris from entering.

Some literature claims that these soft nostril bristles explain the Downy Woodpecker’s name—they look “downy.” Actually, the birds were first named Downey Woodpecker (note the old spelling) by Mark Catesby (1642–1749), an English naturalist and artist who described and painted the flora and fauna of early America, especially the Carolinas. He gave them this name because white feathers along the birds’ back have a soft, downy appearance. These same feathers are more “hair-like” in the Hairy Woodpecker and thus, each species was named for the same feature. An interesting side note is that all woodpeckers lack true down feathers as an adult.

Downy Woodpeckers are a welcome addition to one’s backyard avifauna. Once comfortable with your feeding area, they will lose some of their timidity. I can sit on my deck and have a Downy Woodpecker come to a suet basket hanging just a few feet from me. I hope you too, will find their visits rewarding.