How To Help Birds

Research published in the journal Science, details how nearly 3 BILLION birds have been lost over the past 50 years. In less than a single human lifetime, an astounding 30% of our birds are gone forever!

Dan & Barbara, and other long-term bird watchers, have noticed the declines of species we used to always see or hear each year, and in some cases, Dan used to require students in his UO class to know species that now we only hear or see once a year, or maybe not at all.

Here are some quotes from the news release:

The study notes that birds are indicators of environmental health, signaling that natural systems across the U.S. and Canada are now being so severely impacted by human activities that they no longer support the same robust wildlife populations.

Among the steep declines noted:

"These data are consistent with what we're seeing elsewhere with other taxa showing massive declines, including insects and amphibians," said coauthor Peter Marra, senior scientist emeritus and former head of the Smithsonian Migratory Bird Center and now director of the Georgetown Environment Initiative at Georgetown University.  "It's imperative to address immediate and ongoing threats, both because the domino effects can lead to the decay of ecosystems that humans depend on for our own health and livelihoods - and because people all over the world cherish birds in their own right. Can you imagine a world without birdsong?"

See below to learn some ways WE can help, too.

We've been trying to forgo using plastic stuff as much as we can, but here is a list of additional ideas...and we carry the innovative, folding, cleanable straws called FinalStraw, too...

Here in Oregon, we're aware of a few instances where unseasonal weather (possibly climate change phenomena?) has caused big storms that led to die-offs of swallows who had yet to migrate. For many years in our old home off of 30th Avenue, we would get dozens of Evening Grosbeaks to our large tray feeder. Then, in the late 80s-early 90s, they were gone, never to return while we lived in that home. As a child in Pennsylvania, Barbara watched as thousands of Evening Grosbeaks descended form the trees along a Pocono stream after her great aunt and the young cousins had put out the dozens of feeders full of sunflower seed.

How can YOU Help Change this?

Here are some things YOU and your family can do to help, too. 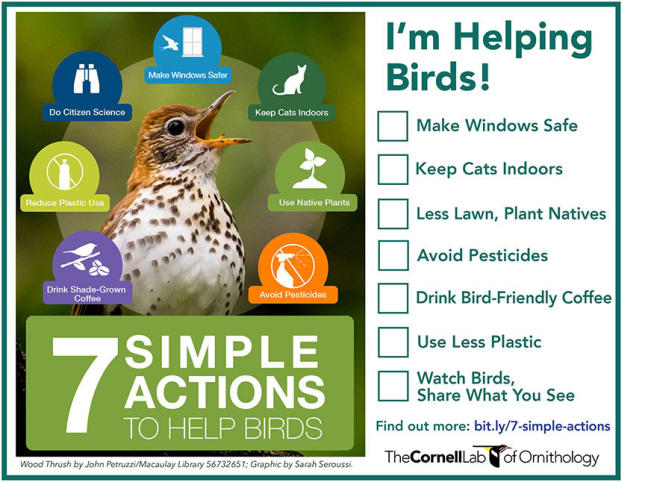