OPB has published an article recommending that people who feed birds take down their feeders, due to the salmonella outbreak related to the large finch irruption this year. Along with many other ornithologists and biologists, we feel this is NOT necessary UNLESS you have sick birds at your feeders! Many years in the winter, natural food sources in the far north run low. This sends finches (Pine Siskins, American Goldfinches, Lesser Goldfinches, Common Redpolls) and other birds that normally feed there farther south to find food in the lower 48 states. When this happens, finches that tend to congregate in large numbers, like siskins, can easily spread disease. These birds are not ones that socially distance themselves!

Salmonellosis is a disease caused by the bacteria Salmonella enterica. There are over 2,300 variants of this bacterium and some cause very specific diseases. One form causes typhoid fever in humans. The most common types infect the guts of many different vertebrates, including birds and humans. Salmonella is one of the most common causes of food-poisoning in humans where its effects range from mild, to very severe and very painful and can lead to serious dehydration. The CDC estimates that over 1.3 million human cases of food poisoning occur in the US each year from Salmonella with approximately 420 deaths.

Salmonella as a disease in birds, is uncommon in the wild, but outbreaks do regularly occur and then we see the evidence at feeders because we see birds congregate there. If droppings are allowed to accumulate, some of the fecal matter may be picked up when birds eat seed in the affected area. Salmonella bacteria cannot be transmitted through the air; it must be ingested to infect the gut. 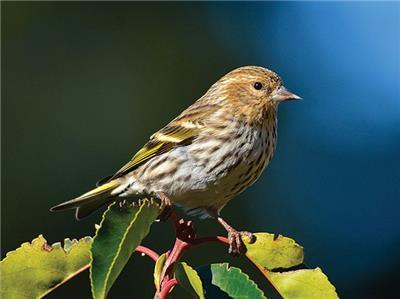 Pine Siskins are especially social naturally, feeding in close association with one another, and they are especially susceptible to salmonella. So given their behavior, being close to one another much of the time, it is not unusual for salmonella to be passed from bird to bird. Keeping feeders clean is essential at such times, but unfortunately, that alone will not prevent the spread of disease. Some sources recommend that feeders be cleaned with a 10% bleach solution and that feeding be stopped for 1-2 weeks to let the birds move on. However, removing feeders does not solve the problem, it only moves it elsewhere. The bacteria survives for many months on uncleaned feeders, on the ground, or on plant or other surfaces. It is passed to birds by other birds less susceptible to the disease, by reptiles, by mammals or even by some invertebrates. Preventing it is almost impossible. Once brought to a communal feeding area (which can be a wild feeding area or a feeding station), the disease quickly spreads. Even if you are very vigilant about keeping your feeders and feeding area clean, Salmonella may be brought in from surrounding wild areas.

Evidence in research suggests that cleaning with bleach may be ineffective by itself. If not cleaned soon after becoming contaminated, Salmonella will form a biofilm. Biofilms are complex structures of micro-organisms, some of them single species like the Salmonella biofilm, and some may consist of more than one type of organism. Dental plaque is a biofilm and so is pond scum. Biofilms are found in intertidal beaches and mudflats where they are an important food source for some migrating shorebirds. 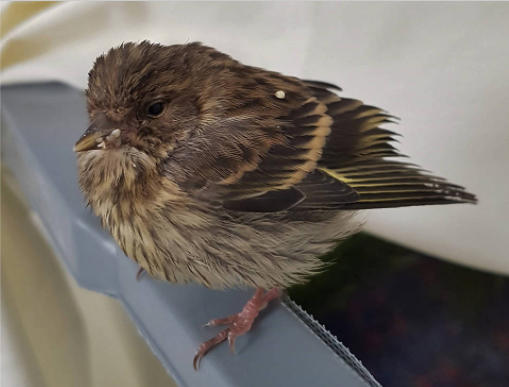 In the case of Salmonella, the biofilm created is a large population of Salmonella bacteria over which a complex matrix binds the individual cells together and helps protect them. The result is that once a biofilm of Salmonella has formed, it becomes nearly impervious to common household disinfectants such as bleach. Washing a feeder with bleach will NOT remove a biofilm of Salmonella. To clean feeders that contain salmonella, it is necessary to break up and loosen the biofilm. To do this, one must use hot, soapy water and a good scrub brush. Hot, soapy water will act as an emulsifier to help lift the film away from the surface and the brush will help break it up and further allow the hot soapy water to continue to penetrate beneath the film. Once well-scrubbed and debris washed away, a 10% bleach rinse can be used. Make sure to rinse well and dry completely. Once the feeder has been cleaned this way, it is important to continue to clean the feeder frequently. If this is done every few days while the chance of Salmonella is present, the combination of hot soapy water, followed by a bleach rinse will allow you to easily remove the bacteria before it has a chance to form a biofilm.

Taking down your feeders is not really a solution to a Salmonella outbreak. It simply moves the problem to someone else’s feeders. If most of the feeders in a given area are removed, the problem may actually increase as more birds congregate around the few remaining feeders. Tray feeders are the worst offenders as droppings quickly accumulate on their surfaces. You may wish to consider removing trays, and only have other types of feeders, such as tube feeders, up until the problem disappears. Be sure to clean any tray feeder before reusing it. A thorough cleaning, as directed above, is most helpful in controlling the problem.

If you have several feeders, you might want to reduce the number you have up. If you don’t wish to take the time to clean the feeders, then it is best to bring them down to prevent further spread of infection. A good one-time cleaning, followed by frequent, but less intense, feeder cleanings should be sufficient to control the problem in your yard. Bird feeding does come with the responsibility to maintain a clean and healthy feeding area, and during Salmonella outbreaks you may need to expend some extra effort. DO also clean suet feeders well, too, despite siskins and finches likely not using them. There is a very small chance that salmonella could get deposited there from birds using those feeders following use of seed feeders.
Salmonella is less frequent, but still very common in Evening Grosbeaks, House Sparrows, Brown-headed Cowbirds, Northern Cardinals, and Goldfinches (especially American). It occasionally occurs in House, Purple, and Cassin's Finches and is infrequent to rare in most other species of songbirds. However, species not showing symptoms can sometimes still carry the bacteria in their gut, and it can be passed to other birds in their droppings.

Pine Siskins are among the most susceptible, and because siskins are so tame and can be numerous at feeders, we see it in them most often. However, be assured that there is nothing wrong with feeding birds and that this disease occurs in wild areas as well as at feeders. We see it more easily at feeders because of their high visibility. The infections you see at your feeders were often brought in from wild areas as Pine Siskins wander greatly.

There is also no difference between using shelled or unshelled seed. The seed you supply is NOT the source of this infection. The bacteria spreads via the feces of infected birds which can get on either type of seed with equal ease. Pine Siskins are messy eaters and spill seeds on the ground. With many birds feeding at the same time, it is inevitable that some seed will be contaminated by feces. Because these birds are so social, this happens in wild areas just as frequently as at feeders.

If you do handle a sick or dead bird, or feeders where lethargic siskins have been, be sure to wash your hands very thoroughly. This form of Salmonella can be transmitted to humans and is the most common type of "food poisoning." It causes extreme diarrhea and very, very intense intestinal pain. Dehydration is typical and may be what ultimately kills the Pine Siskins. Your author, having experienced Salmonella poisoning personally (from an unknown source), can assure you that you do not want this.

Bird feeders covered with bird droppings will always present some hazard to birds feeding on them and this is especially so during Salmonella outbreaks. Keep your feeders clean and intensify doing so when many siskins are frequent, but be assured that if you keep things clean, you are doing nothing to cause this naturally occurring and cyclic problem.
Feeding birds provides more than just your opportunity to enjoy them. There are now numerous studies from around the world that show a benefit to the birds as well. Some studies have found improved health of birds at feeders compared to similar species in similar habitats where no feeders are found. Additionally, some birds in marginal habitats can maintain viable populations because of access to bird feeders.

The request to remove hummingbird feeders because Salmonella is present makes no sense. The bacteria can only be obtained by ingestion and hummingbirds do not feed in places where birds have left their droppings. The only remote chance of an infection in a hummingbird would be if it somehow ingested some water from a badly contaminated birdbath. (Keep baths clean and filled with fresh water.) But the chance of this is nearly zero as hummingbirds do not drink from birdbaths, they obtain all their water from the nectar they consume.

So, don’t remove your feeders, but DO keep them well cleaned. You may still see some sick birds coming in from elsewhere, but if you’re diligent about keeping your feeders clean, you are not the source of further infections.