Pine Siskins, one of our smallest finches (only 5 inches long) are distinguished by a short, conical, very sharply pointed beak, a noticeably notched tail and brown and white body streaking. The prominent yellow wing stripe is usually noticed when a bird flies. Sometimes people find Latin names intimidating but the Pine Siskin has an easy name to remember: Spinus pinus. 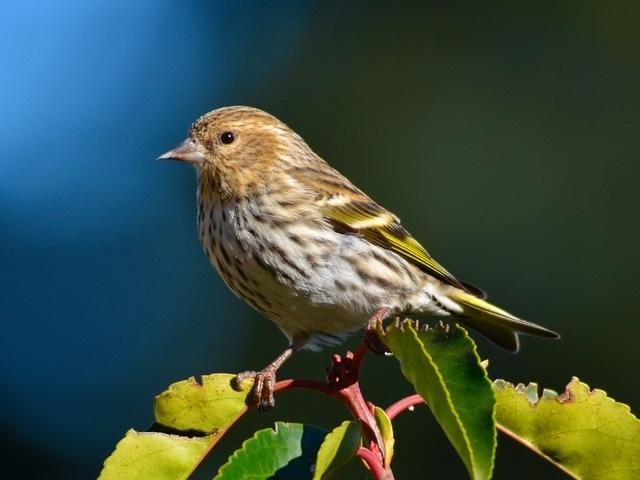 Pine Siskins often appear at feeders in small siskin flocks or mixed with other species, particularly goldfinches and Evening Grosbeaks. But numbers vary from year to year and sometimes they can become very numerous. Siskins can only open the smallest of sunflower seeds, and by following other birds, they find shelled seeds dropped by others. Nyjer (formerly called “thistle”) is attractive to Pine Siskins, as well as to goldfinches because these tiny seeds have a high oil content and are easy for them to open to retrieve the small reward inside. Such tiny seeds are generally ignored by other birds because the energy used to open them is greater than that derived from eating the seed. If you provide Nyjer or shelled sunflower, goldfinches and Pine Siskins will enjoy it when they discover it.

In the Willamette Valley, Pine Siskins are often seen at feeders in fall and spring, but they may appear at any time. This is an irruptive species, wandering unpredictably through northern forests of Canada and the western U.S. One year, they may be abundant at your feeders, then absent for a year or more before being seen again. Feeding on a variety of small seeds, they are especially fond of small-seeded conifers. As they wander, if they find a good crop of seeds, they may begin breeding at any time of year.

Pine Siskins have a buzzy vocalization that rises in pitch, sounding like: “Tseeeeeee!”

Siskins and Salmonella
Pine Siskins are relatively tame and easily approached, making them easy targets for cats. But sometimes, siskins at feeders seem especially sluggish and appear sleepy or reluctant to move and often you can pick them up easily. The usual cause of such sick and dying Pine Siskins is an infection of Salmonella bacteria, and for whatever reasons, Pine Siskins are more susceptible to this bacteria than are most other birds.

Two species of this bacteria cause problems in birds. One species typically infects waterfowl, grouse, and most frequently, domestic fowl. The other species infects many wild birds (and humans). Different bird species react differently to Salmonella infections. Many show no symptoms and others are mildly lethargic for a day or so, but little else. On the other end of the spectrum are Pine Siskins, who suffer high mortality rates from infections. It can be distressing to see infected birds at your feeders, but even if brought to rehabilitation facilities, such birds usually die.

Salmonella infections are relatively rare in the wild, and are somewhat more common in the West, but when outbreaks occur, we often see evidence at our feeders. Asymptomatic Siskins can be mildly affected, and may carry it without showing symptoms, simply passing it on in their feces, with the bacteria still active. Then, when a susceptible individual of an easily-infected species, like Pine Siskin, picks it up, the bacteria proliferates quickly in the infected bird's system and is passed along via its feces. Siskins feed in close association with one another and quickly spread the disease between individuals.

Keeping feeders clean is essential, but unfortunately, when Salmonella strikes, that alone will not prevent its spread. When an outbreak occurs, I recommend that you clean feeders with a 10% bleach solution, followed by careful rinsing then complete drying before reuse. If you see numerous sick birds, you may need to stop feeding, perhaps for a couple of weeks, to allow the birds to move on, disperse, and avoid reinfection. Unfortunately, the bacteria can survive many months on uncleaned feeders, on the ground, on plants or on other surfaces. It can be passed among birds by other birds, by reptiles, mammals, or even some invertebrates. Preventing it is almost impossible. Once present at a communal feeding area (in the wild or at feeders), the disease quickly spreads. Even those who regularly clean their feeders may see Salmonella being brought in from wild areas.

When disease outbreaks occur, much misinformation begins to circulate. Because sick birds are easily seen at feeders, misinformed people blame those who feed birds for causing or promoting disease. Studies have shown that this is NOT true. This disease is just as frequent in wild areas as it is at feeders. In fact, infections seen at your feeders were most likely brought from wild areas where siskins have fed.

This infection has nothing to do with what food is being offered; it makes no difference whether you are using shelled or unshelled seed. Seed provided at feeders is NOT the source of this infection! The bacteria that causes Salmonella is spread via the feces of infected birds on all surfaces, not just from contact with seed. Known to be messy eaters, Pine Siskins spill many seeds to the ground and infections are spread in the wild as frequently as at your feeders. If sick Pine Siskins arrive at your feeder, keep your feeders and surrounding area scrupulously clean until birds no longer show symptoms.

Most often, siskins feeding at your feeders are fun to watch as they devour the sunflower or Nyjer seeds you provide. They may appear a couple of times a year or a few years apart, but the birds always return and your feeders will provide an opportunity to enjoy these small, but entertaining birds.